Except when you're not. There were days during our life in France, after we had bought the house, after we had bought firewood and pansies and lamps and French lessons, when I didn't feel as if I were truly "there." Or anywhere. Being French seemed so elusive, and if I couldn't be French, if I couldn't be a part of things, who was I, exactly?  Who were we? What had we based all that heady anticipation upon? A good friend of ours told us that it might take us a very long time to know why France just didn't feel right to us. And so, as I look back at photos of travel and tickets and landscapes we loved, I still wonder: 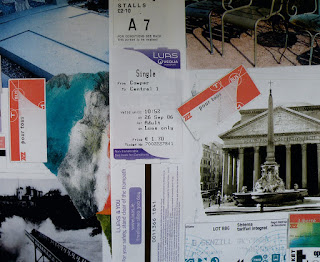 There's Biarritz, there's a trip to see Georges Braque's grave, the Luxembourg Gardens chairs, LUAS tickets from Dublin,  tickets from Barcelona and Lyon and a photo from our final European trip as a family of 4, to Rome and the Pantheon. It is who we were, who we are, we travel, we move, but now, in the Western parts of the U.S., when we move, it seems to me that we bring everything we are with us... more often.

I found a poem by Amiri Baraka today... it is called "Numbers and Letters," and while pieces of it are not who we are, who I am (he writes, mid-way through the poem, "I'm Everett LeRoi Jones, 30 years old"), pieces of the poem seem to say, whatever it is, if you need it, if you look for it, you will find it. Baraka speaks to his audience in a familiar way... but urgently, "listen, listen," he calls:

If you're not home, where
are you? Where'd you go? What
were you doing when gone? When
you come back, better make it good.
.... Say what you mean, dig
it out put it down, and be strong about it.

I can't say who I am
unless you agree I'm real.

I can't be anything I'm not
Except these words pretend
to life not yet explained,
so here's some feeling for you
see how you like it, what it
reveals, and that's Me.
....
I am a meditative man, And when I say something it's all of me
saying, and all the things that make me, have formed me, colored me
this brilliant reddish night....
this is a messenger calling, over here, over here, open your eyes
and your ears and your souls; today is the history we must learn
to desire. There is no guilt in love.
---excerpted from "Number, Letters"
from Transbluesency: Selected Poems 1961-1995
by Amiri Baraka

So, we bring love and colors and poems and a few boxes of seashells and books to California...  and we try for "some feeling" and to learn "today is the history" that we want, that we make.
Posted by Ann Knickerbocker at 4:55 PM