Freud, Rome, and a bad painting

Early on, in Civilization and Its Discontents, Freud is in the middle of an explanation ... "originally, the ego includes everything, later it separates off an external world from itself. Our present ego-feeling is, therefore, only a shrunken residue of a much more inclusive -- indeed, an all-embracing -- feeling which corresponded to a more intimate bond between the ego and the world about it."  He then assumes that, in at least some people, the earlier form of ego can co-exist with this mature ego, "side by side."

Freud tries to find a metaphor for this side-by-side possibility and finds... Rome. He says that it is still possible to find "the wall of Aurelian almost unchanged" along with other early remnants, and these intact or ruined forms are "dovetailed into the jumble of a great metropolis." And it's true; walking in Rome, we stumble across old stones and new cement, ancient and new graffitti...This could stand for a model of the way a mind works... but then he gives it up as a metaphor (unfortunately, because even though it doesn't really work, it such a cool idea) because "the same space cannot have two different contents." Freud admits that "On the Piazza of the Pantheon we should find not only the Pantheon of to-day, as it was bequeathed to us by Hadrian, but, on the same site, the original edifice erected by Agrippa; indeed, the same piece of ground would be supporting the church of Santa Maria sopra Minerva and the ancient temple over which it was built." He gives up on the metaphor, but not the idea: he says "it is rather the rule than the exception for the past to be preserved in mental life." So he can get going with the rest of the book... (the edition I used was translated by James Strachey,  New York: W.W. Norton and Company, 1961 and 1989).  This book is a wonderful exploration...

As it is with Rome and the mind, so it is with paintings, I am arguing.  Maybe paintings, from the start, come with an ego that wants to survive at all costs, even outlasting maturity. I had a painting, a bad one, that I had worked on over months. I had an initial idea; it sounded great, and the first "draft" of the painting held together nicely. But then I tried to improve it, and the picture didn't want to go there.  It was 24" square, and it just sat there. I have a few tricks that I can use... and none of them worked. So I decided to do an archeological dig on the painting. I sanded it. I got down, in some places, to the earliest, hopeful layer. In other places, colors showed up in new combinations. I am now hopeful that the Roman metaphor can work for me: ruins, old foundations, crumbled paint, and new paint, all "dovetailed." Here is a corner of the painting, progressing, I think, well: 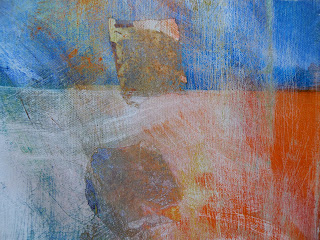 Posted by Ann Knickerbocker at 6:58 PM