the role of the color white... not just a primer for the canvas...

In the Geffen Contemporary, part of the Museum of Contemporary Art in Los Angeles (a.k.a. MOCA, located in a former firehouse; we went with our son and his girlfriend), there are very new works up against a few older pieces. The curators have included remarks by the artists next to the pieces, which is really helpful: it lets you know what the artist's view might be, and helps you see a little bit into the painting process. Next to his painting with white and globs and scribbles and script and slashes, and a checkerboard, the curators chose this as Cy Twombly's quote: "I like white... It's not closed. And I think psychologically it's like there's no beginning or end. Then the painting doesn't have a center -- it comes in one side and goes out the other." Twombly is probably best known for his huge canvases with lots of white space, and a few well-chosen markings (someone said that these are modeled on the graffitti -- or perhaps the inevitable marks of time and lovers -- scratched into the columns and facades of Italian buildings). He has owned homes in Rome and further south in Italy and returned frequently to his home in Lexington, Virginia, as of the last interview I read. I think his work is filled with light, whether it's Virginian or Roman or Napolitano... Here is a rather typical work by Cy Twombly,  "Untitled," from 1964 and 1984 (oil, pencil, and crayon on canvas, over 6 x 8 feet): 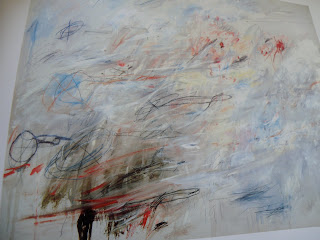 Some people don't much care for what they call Twombly's "doodles." But I think there is real energy here, and lots of bright, open space. I talked to an artist once who said that she thought of white and black as filler, non-essential, round-the-edges kind of colors. White, because it's so opaque, gets bad press, except from people who see it as Twombly does, as more related to a flash of lightning than to a light-blocking curtain. I think white and black are colors in their own right.  Maybe we don't see them in nature all that often, as pure colors, but maybe that alone is a reason to appreciate them.  Then, too, with a little alertness to black and white, the painting moves, because, as Twombly said, "it doesn't have a center."
Posted by Ann Knickerbocker at 5:50 PM