Sometimes I take a photograph that I really like... and I try to figure out its patterns. It wants to be a painting, I know... so what's there, what's not, what is it trying to tell me? Here's a photo I took, in the full morning sunlight, in a hotel room, and the shadows and reflections are very strong: 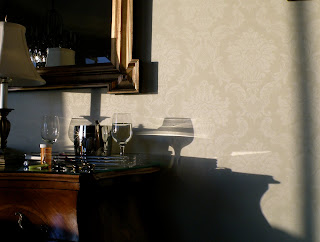 Here is a first quick -- only a few inches -- sketch; I decided that this photograph doesn't want lines; it wants paint: 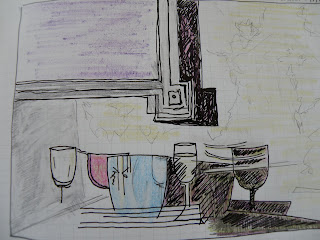 So, this could be a small painting or a print... it needs a shot of bright light through its center.

So, changing now away from the photograph...  thinking about artworks that create their own patterns deserving scrutiny: here's one that just showed up in a few inches of the corner of a painting, while I was busy adding and removing colors, and it arrived and is utterly adamant about staying: 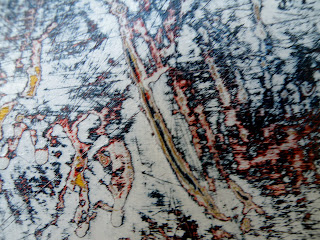 Or, below, a pattern has re-asserted itself--it just came and stayed, and found itself in several paintings as something of a star.  I found the idea of the white square comforting for awhile, and the square showed up over several large (2 x 4') paintings... until I was ready to move on. Only, recently, I found myself sketching that square, again... I think it wants a new life, maybe on a smaller scale: 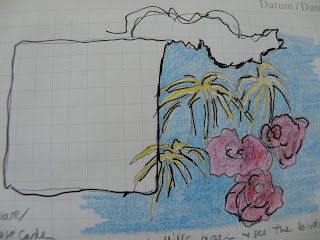 So, that's the plan: a painting of the light and shadow on glass and wall, and then a re-working of the white square, finding new life, as a monotype.
Posted by Ann Knickerbocker at 6:29 PM