blues revisited... and once more, with peony

I forgot one of the best "blues" painters I know... Claude Monet. I was reminded because the New York Times has a review today of the Gagosian Gallery's show "Claude Monet: Late Work" (at 522 West 21st Street, in Chelsea, through June 26). The reviewer, Holland Cotter, writes "The fact is that everything of essential importance that happens in the world happens in miniature in a garden in some form. To know this is to be absorbed into the botanical drama. Monet was absorbed, and he tried to simulate that drama in art" (p. C22, today). Exactly. Here is a blue or two from Monet to absorb: 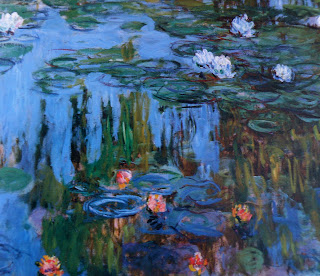 This may not be in the Gagosian show; this is a detail from a painting called "Nympheas" from 1914-17. It measures 63 x 78 3/4" and is in the collection of the Portland Art Museum. Then, here's another, different blue: 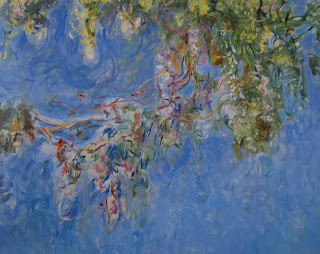 This is called "Wisteria (Glycines)" from about 1919-20, and is from the collection of the Allen Memorial Art Museum at Oberlin College. While neither of these may be in the current New York show, they are similar to the works pictured from that show... particularly the emphatic blue.

Another critic wrote that Monet's work "far from being passive, requires an unusual power of generalization, of abstraction ... Monet declares: here is nature, not as you or I habitually see it, but as you are able to see it, not in this or that particular effect but in others like it. The vision I propose to you is superior; my painting will change your reality" (quote from Michel Butor, 1962).  Wow. That's a lot for a critic to claim on behalf of a painter... but if you have ever stood in front of one of Monet's large (blue!) panels of waterlilies, I think you would have to agree. It does change the way you see.

And now, back to the garden, and the peonies that came into the house two days ago. They are still spectacular, but now increasingly part of what Holland Cotter would call that "botanical drama." They are opening up and at this vulnerable, beautiful point, they are dying: 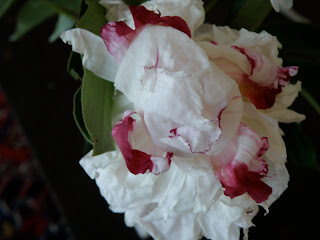 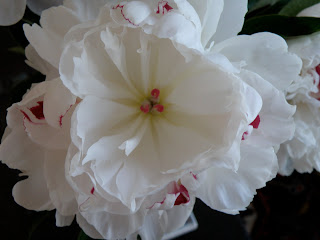 Posted by Ann Knickerbocker at 9:39 AM