draw another brick on the wall...

Last night, over dinner, we were talking with our friends ("the R& R team") about walls. We started by talking about the wall murals in Belfast; it is possible to "see" at least parts of the history of Northern Ireland through the art on its buildings. Then I started thinking: everywhere, walls "talk." Our children came back from a trip to Berlin with portraits of each other taken up against colorful, standing remains of the wall and also were tempted by "pieces of the wall" that were up for sale. The Lascaux caves in France had to be reproduced (right next door) in another "cave" to save the original walls. Cy Twombly's paintings seem to be inspired by the "graffiti" that was scratched into Roman walls and columns and stones and monuments. Jean-Michel Basquiat's work took the figures and the desires and the signature initials and scrawls of the street into the studio and the galleries. Diego Rivera's murals lead to hundreds of later murals: San Francisco's walls are one example.  Some walls in cities are set aside for artists to address the space in changing exhibits; sometimes the letters and outlined holes and cracks in the wall and the faces are positively lyrical.

Then, of course, there is the problem of the unwanted street tagging, the pristine wall of a neighborhood or school that is suddenly defaced. Is this a problem of intention (on the artist's part?) or reception (the audience is not amused) or reputation (another audience problem: if we knew the work was by Cy Twombly, we would likely frame it).  We do have a Parisian friend who lives proudly behind a graffiti'd door... because "no-one knows" about his beautiful little courtyard behind that door.

That's the outside; then there is the matter of the inside wall. Our restaurant, last night, had held a contest for an artist to paint its back wall. At night, walking or driving through a new town or a new part of a city, I look into windows and I am always surprised at how many white walls I see: not even the posters of a college dorm room, not even dogs playing poker. But many parents put up their children's art -- affectionately called "refrigerator art" -- in their kitchens.We have one from our neighbor; he is nine and he just recently learned to draw a panorama:

So why does the fridge get to be the only fun place?
Posted by Ann Knickerbocker at 6:25 AM 2 comments:

the photograph that became a painting, and yet...

I took a picture of my feet.

This isn't as strange as it sounds... I tended to take off my shoes when I came through the front door (into our house in Normandy) and I would throw my feet up onto a chair or ottoman to relax. We also had a bed that was a little on the short side, so feet crept out from under the covers... So I saw my feet a lot.

I had just learned a new French phrase: tout arrive. It means, as I understand it, it will come, it will happen (so give it time!).  I wanted to paint something that illustrated that phrase, which meant, to me, that we had come to this point, where we didn't exactly "fit" the way we anticipated we would, but we would, I hoped, continue to feel more and more a part of our French world ...

So I painted the feet (just mine) in our bed, with our squared window above (we could often see the moon or stars). It was a dream, of sorts... I think I intended the right-hand side to be the "tout" that would come in time.

When I took this painting out of the stack, I was prepared to hate it. It wasn't exactly a happy painting, but when I was working on it, it was hopeful, and I so wanted it to be "true." I do think it is true to the moment when I painted it. And, in its own way, I feel I need to admit that this is a good painting. 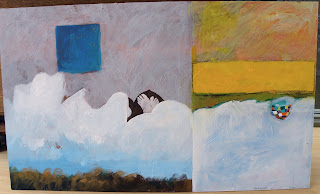 And in its own way, it did come true, the tout arrive. It did come, the life, just not in France!
Posted by Ann Knickerbocker at 4:04 PM No comments:

about 118% of normal precipitation for our area, they say... while we wait for the sun, a little photo of an antiques-store light, a bowl from Tunisia, and a painting, in the semi-darkness.... 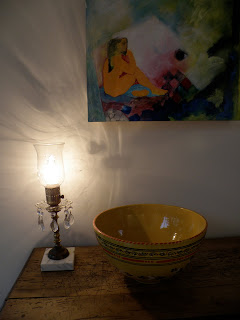 Posted by Ann Knickerbocker at 4:30 PM No comments:

It was a misty day most of the day today, so it was a good day to work inside. I am rescuing the "bad" painting from the other day, with both Agnes Martin's point about composition and Sargent's lush brushstrokes in mind. I now have a layered work that I like... this might not be its finished state, but I am happy with it so far (it is now on the right, below).  And I brought in a newly sanded "blank" canvas (left) to look over for awhile to see where its best direction lies. These two will sit here and I can see, over time, what they need: 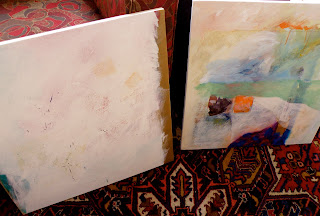 And I can hear you saying, how will you know? Gertrude Stein said, in a little piece called "Pictures," that "to give me this interest the painting must be an oil painting... for me it has achieved an existence in and for itself, it exists on as being an oil painting on a flat surface and it has its own life and like it or not there it is and I can look at it and it does hold my attention." The painting must be seen. And when I am really working on a painting, or a series of paintings, problems and their solutions can, sometimes, come into my mind suddenly and insistently... and when that happens, I feel lucky.
Posted by Ann Knickerbocker at 5:57 PM No comments:

sargent (good) and the (still-bad) painting

When Michael Kimmelman wrote about the Sargent-Velazquez pairing at the Prado Museum in Madrid (see May 9 entry, below), the piece encouraged me to look at Sargent again. I found a painting on the web that I had never seen before, a gorgeous, fairly typical lush Sargent, called "Nonchaloir (Repose)" from 1911: 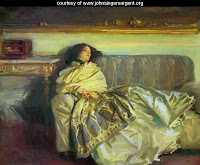 Sargent often painted portraits where the subject (because she has paid) is shown as engaged, and lively, and enviable. Here, this (relatively small, at 25 1/8" x 30") work shows a woman who is not -- despite the painting's title -- in "repose": she is clearly restless, unhappy, and although her body has tucked itself into a corner of the sofa, her hair and the fabrics are only just under control. Her hands are clasped uncomfortably in a kind of confused show of fingers... she looks as though she might be wrapped in a sheet or some kind of elaborate shawl that might match the sheen of the skirt. There is just enough gold leaf on the table and frame above her to make clear her wealth... and her unhappiness.

Agnes Martin once said that "People think painting is about color/ It's mostly composition/ It's composition that's the whole thing/ The classic image -- /Two late Tang dishes, one with a flower image,/ one empty -- the empty form goes all the way to heaven" (from "The Untroubled Mind," in Writings).  The composition in this Sargent is so simple, but I think the horizontal lines work with the colored whites of the fabric to help us see the air inside the frame. The "empty" whites here pull you in... the viewer breathes the same air & wants to know more about the room, the moment... Even though the fabric shows strong brushstrokes,  the painter-li-ness makes it seem, somehow, touchable, something that could move in a slight breeze. Sargent and Vermeer both give space, even in their interior compositions.  They leave emptiness. I can't figure out how that works, but they do.

And then there's my poor thing, languishing in a corner of the living room. Despite the sanding that I thought had cleared it out a bit (May 3rd entry), it seems clogged and still: 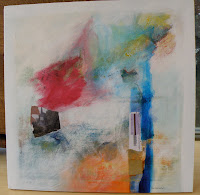 It has no composition, as you can see. And therefore no air. A lot of white, but unreal, straight white. Insufficient emptiness.
Posted by Ann Knickerbocker at 8:21 AM No comments:

a zinfandel (not from the usual places), a covered bridge, yellow poppies and a lavender farm

We took a drive and found a zinfandel from Lodi, very good, tasted in an espresso bar at about 10:30 a.m. (unexpected!); we bought two bottles of Barsetti 2006 Zinfandel. The area in and around San Joaquin County was beautiful to drive through: vineyards with roses at the end of each row, wooden barns, horses, strawberries and cherries (at least, today), nut orchards, a very! hot midday and rows of trees planted along quiet back roads.

We stopped in Escalon, a little town that says its motto is "peaches and cream." We found the old center of town (Main Street!) with a pretty little antiques store, The Green Pea, along it, and then we drove to the lavender farm... only a few blossoms right now (and they arrange tours and lunches on weekends).  Further on, in Knight's Ferry, there is a park with a walking path to a covered bridge, and it was on the way here that we found the yellow poppies (California is famous for its orange poppies, as France is for its red blossoms, but we had never seen these colors together before): 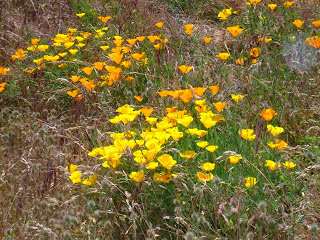 And, just for old times' sake, we did see one red (French-style) poppy: 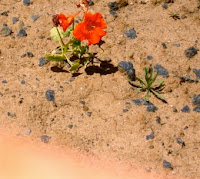 Posted by Ann Knickerbocker at 5:45 PM No comments:

Because it glowed as I took this picture!

Giacometti said (in about 1963) that "You never copy the glass on the table; you copy the residue of a vision... Each time I look at the glass, it has an air of remaking itself.... it really always is between being and not being. And it's this that one wants to copy."

It is that shimmering of its leaves in the sunlight that we hope to catch. 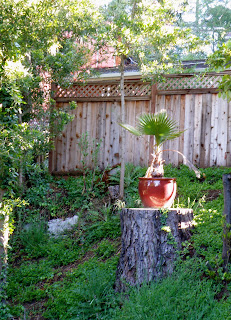 Posted by Ann Knickerbocker at 4:28 PM No comments: