"it has glace and sirop and steak and paintings" and blue-ish white ... and one more blue

I keep journals, all shapes and sizes, from the years since my husband and I met. One journal, devoted to one of our summer trips to France, has several drawings by our children, mostly sketched in as we were waiting for dinner. Here is one sketch by our (then) very-young daughter where she has written all the essential ingredients for a good restaurant visit [glace meaning ice cream, by the way]: 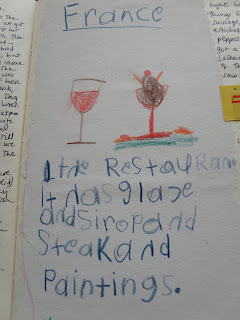 This was a quick little study, and very funny at the time! I especially like the combination of steak and paintings. We brought our American selves to France repeatedly, trying to absorb the details of life there. We succeeded better as tourists, perhaps, and as wishful thinkers, in blending in, more than we did when we actually lived there. And so ... we do wonder why that is. I read an interesting article by Michael Kimmelman in the April 27th New York Times; it is called "Local Heroes, Far from Home." It is really a very strong, though short, critical essay. Kimmelman begins with the idea that "good" art "retains meanings specific to a certain time and place." Hopper's dark interiors and bleak city corners can, "to New Yorkers who know them intimately, ... evoke... a singular beauty and dignity amplified by, and grounded in real, lived experience" that other viewers, from other places,  might not feel. He gives the example of Heinrich Zille, a painter who "focused on places and qualities rooted in Berliners' particular self-image," and says that we might be too likely to dismiss his work because his experiences are not ours. And finally, he attends a show at the Prado Museum in Madrid where Velazquez's "Las Meninas" is toe-to-toe with Sargent's painting of Edward Darley Boit's daughters (Americans in their new, posh Parisian apartment). He tells us that Americans see the "modern outsiders" in these Sargent portraits; the ideas we have about "new money and social ambition" make us more likely to identify with Sargent's (portrayal of? or Sargent's own?)  "outsider's striving." This is a pretty bold claim. As I read it, he is suggesting that Americans who view the exhibition would feel Sargent the equal of Velazquez ... although, he implies, Velazquez is, in some objective way, a far better painter. And most critics would readily agree. For the record, Charley goes for the Sargent.

But it is an interesting idea, this one that art may not be so universal. I am finding that I don't want to agree. I want to believe that, like dance, visual art makes its impact without the use of language, so that nothing gets lost in translation.  But then, perhaps, Kimmelman's point might explain at least some people's experience -- like ours -- that the wealth of experiences that we store up as inhabitants of one country leave us rather unprepared to (truly, without ambiguity or second-guessing) take on those of a new place.  Gertrude Stein managed it; she always said that everyone has two countries, the one they come from and the one where they belong. America is my country, she said, but Paris is my hometown. Perhaps, when we only come halfway to that feeling, it isn't enough.

So, artistically, then, given the idea of the (preferable? more flexible?) blank slate: I am working now on a 24" square painting that has undergone two or three major changes already; I finally gave up on the original ideas and painted white over the whole. Now it is sanded down and waiting for the next re-vision: 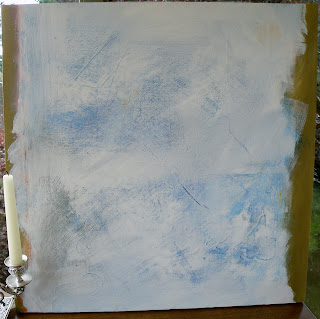 I am now working on it... and will post the next version...

But I can't resist one more blue... Picasso's and Motherwell's apparent favorite blue, from the famous cigarette package, that I found on a street-corner: 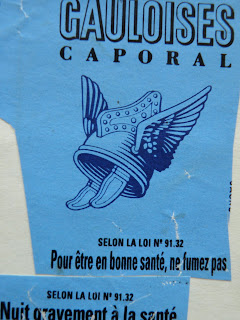 Posted by Ann Knickerbocker at 5:52 PM