Back when we lived in Upstate New York, we had a group of writer-friends over one night for dinner. The house had all these huge, rather noisy paintings of mine all over its walls, and one of the guests stood for a long time in front of one of them.  He said, "It must be nice to paint. You can just hang the work up and that way everyone can see it and once people see it, it's done.  It's just there. When I write, it can take months or years before anyone will ever read it. I never know, even after people buy my books, what they think. I never hear from them; I never know."

I don't think I had ever, until that night, thought about it that way... that the viewer completes the circle. I guess I didn't think of just one or two viewers as meaning the work was then "done," but in a sense, it is.  Picasso used to say that it was so difficult to "stop" painting a painting... he claimed that it would be impossible to say that any given work was truly finished. I stop painting when both Charley and I like the picture. So, I guess, in that sense, it is "done."

After the final no there comes a yes
And on that yes the future world depends....
If the rejected things, the things denied,
Slid over the western cataract, yet, one,
One only, one thing that was firm....
One thing remaining, infallible, would be
Enough....
Out of a thing believed, a thing affirmed...
from "The Well-Dressed Man with a Beard"

Just one "yes" to a painting (or, okay, in our house that would be two) or a poem or a short story, just one, one listener or viewer is enough... more is better, of course, but one is a start. That something can go from a thing "believed" by one person to a thing "affirmed" by another: this is wonderful. Of course I should mention that Stevens ends the poem with the rather more complicating line: "It can never be satisfied, the mind, never."  Whose mind? The artist's? The audience's? Anyone's? Perhaps he means fully satisfied in some way... that once one painting or poem is "done," the next lines up to be painted or written and then judged... For some reason, though, I find this poem really lovely, and oddly positive. 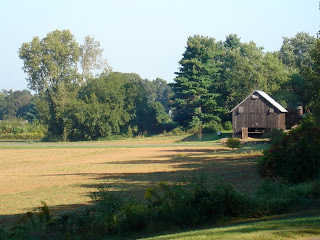 In honor of Wallace Stevens, who was also an insurance executive in Hartford, here is a Connecticut barn (formerly used to dry tobacco) in the morning sunlight of a September day.
Posted by Ann Knickerbocker at 8:28 AM