"some conflict between two improbable elements," to quote Walter Murch

The two elements: snails and wet paint. We once had a French friend, very clever, who gave me a snail platter and said that he knew that we were not likely to eat snails, but perhaps I would like the little platter (intended to serve just enough snails for one person's entree) to use as a pallette.  I thanked him and put the plate away and only found it recently, and placed it, mostly as a gesture, in my studio. That was before I decided that my Nice beach rocks (see entry below) all had to be painted in subtle variations of gray and brown; I was going to have to mix the most difficult colors. I was going to be able to use my snail platter. I started to mix blues and yellows and whites and browns and blacks -- and got -- rocks! 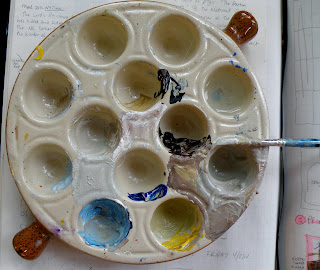 At least the first version... they may shift and change... but now I know how I'll get them there. Here they are as of the end of the day today: 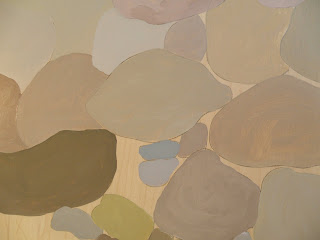 So, to continue to play a little more, the quote that forms the header for this post -- the "conflict" -- extends further than snails and wet paint. Our son sent us this link today http://vimeo.com/11117217 .  It is a part of a lecture by the sound designer Walter Murch about the link between the origins of cinema and -- Beethoven, Flaubert and Edison. He says, to paraphrase him quite a bit (I highly recommend the original!) that Haydn and Mozart wrote music that was "architectural" and worked to "examine [patterns]... in all their detail." Most importantly, for Murch's point, "once you started a pattern [in music] you did not break it." But then Beethoven comes along, and he is not nearly as interested in architecture as he is in nature. He would "go for long walks and he would look at the clouds.... and then he would capture that nature and force it into his music."  He would allow one sound to be interrupted by another, and Murch says that as we hear Beethoven, we are really "hearing the grammar of cinema: the idea of the cut, the idea of the fade, the idea of the dissolve, the idea of parallel action, the idea of the long shot..."  And that's when he says that "some conflict between two improbable elements" is the "business" of cinema. Brilliant!

So, as I listened to Murch, I got more and more excited, because of course the same thing is happening in painting, over time, that the preoccupation with perspective and the continuous line and the single viewer shifts radically, first with Turner and then, much later, the Impressionists.... in an attempt to show the audience how it feels to see the sunlight reflecting off a church window at different times of the day... yes... it's the same thing... the lines are broken, and the rules along with them.

But Murch isn't finished! He begins to talk about Flaubert and writers and painters who are "fascinated wiht the impact of realism."  Several pages of Madame Bovary go by and "nothing happens," except "the dynamic representation of closely-observed reality." And then Murch moves to Edison... which is where I leave him.

(But) I am still thinking about the train of thought he has begun...And then I look back at Manet's beautiful still-lifes (these pictures are not shown much, and they should be!) and moving, then, to my mind's eye images of Cezanne's mountain and Picasso and Braque's cubist experiments. Think about the "conflict between" that we can see in their work. And we can suddenly see how this dynamism of cinema, for example "the idea of the cut... the idea of parallel action" turned into seeing all sides of a vase, a face, a table with a pitcher. And I think that this is what I still try to do... to try very hard to observe reality, without the enforced use of perspective or trompe l'oeil, without tricks, but with interruptions, changing patterns, split screens, as it were, because that's how we experience life, in a kind of rush, and then we stop and look at something, and then we move again.... This is what I hope that I have done here, in a painting of the way the light floods into our living room, called "Light All the Way Down to the Ground": 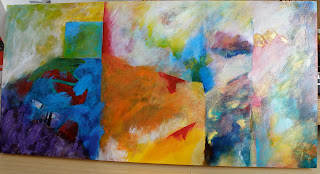 Posted by Ann Knickerbocker at 4:44 PM