a little bit of blue

We watched "Avatar" last night with our granddaughter. Really fun! Pretty early on, it's clear that our hero will have to make some tough choices. And, pretty early on, it's clear that, as my husband says, the worlds he has to choose between are as distinct as black and white. But it wasn't the colors of black, white, or even the shades of gray that I was thinking about after the movie ended. I dreamed about blue. Blue, in the movie, was the color of the Navi, "the people" (also, as my husband says, the name that Navajos and many Native Americans gave their tribes), the people whose world may disappear in the rush past the anthropological study -- a rush to attain the amusingly-named and apparently very lucrative "unobtainium." Blue may have been chosen, as the interviews and reviews suggest, because green was taken... but I think it's deeper than that.

If we see, as I think we can, that the source may be in art, then the obvious suspect, Picasso's blue (his Blue Period) doesn't really help us. Most people argue that despite the advances in this series, Picasso's blue men and women are frightened, sad, lonely, very nearly dying. The Rose period, when the Saltimbanques come in and brighten up the place (to an extent, anyway) is still around the corner. Besides, Picasso is the line guy. The color guy, the guy you want to go to, is Henri Matisse. In 1992, MOMA in New York City held a retrospective of Matisse's work. (We were able to go courtesy of our friend Maryann). I loved that show. I came home and began to fill in a series of problematic paintings -- I had no idea where to go with them -- with the one certain thing I came away with: Matisse blue. Now, you need to know that it didn't really work, as a kind of all-purpose solution. I did have to toss several of those paintings. But I did come away with a sense that, used carefully, that color was compelling. Here is his blue, from a photo I took of one small corner of a painting: 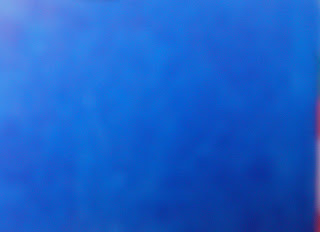 Fabulous, right? Who can argue with that? And I have to say that I still do go to this blue (or as close as I can) when I want beauty, repose, calm... Here is a detail (a couple of square inches, from one of my recent 2 x 4' paintings) as proof: 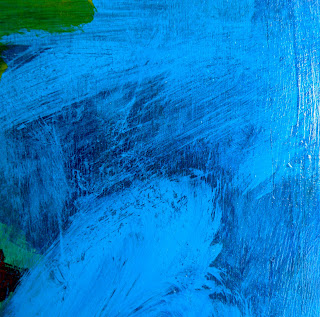 It is likely it wasn't fully conscious --- at least, not as far as I know --- but when James Cameron came to adjust the final tints on his Navi people, he chose this blue, a blue that calms, the blue of the Mediterranean, the blue of the not-city, the blue of vacations and rest. The photo below is a close-up (of skin from an online movie review that included a shot) of one of the (blue) people: 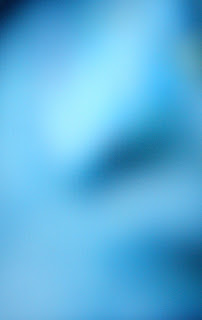 This blue is delicate, touchable, "a mate for life," to use the movie's terminology.  There are many, many action shots in the movie, complete with truly ugly war machines. But it is the blue people walking through the lush forests and riding their strange flying creatures and that one shot of a baby being carried by its mother that stay with the audience... at least, with me. Blue. Nice touch. And pretty irresistible: I found this random sketch in my journal, a sketch of a (North African?) tile: 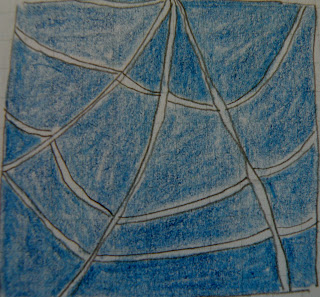 Blue. Not the blues. Just blue.
Posted by Ann Knickerbocker at 6:01 PM