expectations: tender buttons and rocks washed by the sea

"If the centre has the place then there is distribution. That is natural. There is contradiction and naturally returning there comes to be both sides and the centre. That can be seen from the description."
-Gertrude Stein, from "Rooms,"
in Tender Buttons

I love Stein's work. This is one of her best-known books, difficult as it is, but critics almost never talk about this third section of the book. They prefer the first section, "Objects," which has rather lively and unlikely contradictions (such as, "If lilies are lily white if they exhaust noise and distance and even dust...").  But "Rooms" has its own peculiar attractions... if you like literary play and puzzles... and I do. I like the way the little quote above about "the centre" is almost like a stage-set, or a bit of choreography, making words do things they aren't used to doing: opening up, talking, perhaps, about people's response to stages and space and centres. This, to me, seems to be about stillness and movement, and perhaps about thwarted expectations... she tells us that both "distribution" and "contradiction" can be seen as "natural" and "naturally returning" and that we can see this... if we just look. And how does she end this final section of the book... and thus the book... she writes:

"The care with which the rain is wrong and the green is wrong and the white is wrong, the care with which there is a chair and plenty of breathing. The care with which there is incredible justice and likeness, all this makes a magnificent asparagus, and also a fountain."
-Stein, from "Rooms," TB
I love the poetry in this, the repetitions, the flow of the words, the soothing rhythms.  Even if you think it doesn't work, she seems to be saying, even if it feels a bit "wrong" to you, the movements you have been watching and reading about here... or on any stage, perhaps, were created with "care." And you will find, if you look, something called "incredible justice." What is that? I'm not sure, but I'd like to find it, too. And last night we did have "magnificent asparagus" for dinner, thanks for noticing. Stein was a happy person. And these final 2 sentences from this section are definitively happy.

Stein makes me wonder, in a good way. And I have been thinking about her a lot as I have been working on, and looking carefully at, my newest large painting (Charley calls this new one "ambitious").  The larger part of this new painting is going to be an abstracted view of the beach at Nice.  I had heard about the French Riviera for a long time before I saw it.  I once read a story about Grace Kelly's wedding party in Monaco; Cary Grant backed into David Niven's car and said "Awfully sorry, old chap." As I remember it, anyway, and so I thought the whole coast from Spain to France to Monaco and Italy was, as my daughter laughingly said, "paved with gold." And so it was quite a shock when I realized that the beach at Nice was actually paved with... rocks. Big rocks, little rocks, a bit of gravel, here and there a bit of dark black dirt. Here is my photo: 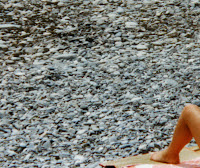 I was really surprised. Some people had mats, or chairs, but others just... sat. Rocks! They were rather smooth. There was no tide. There were rocks and a bar that we could swim to, if we wanted. I got past the strangeness. And I guess that's why I was thinking of Gertude Stein and the rocks at Nice.  If you sit and look long enough,  it doesn't seem 'wrong" anymore and "there is...plenty of breathing."

So I have been working on this new painting, partly about Nice and its rocks, and so I scattered, for fun, a few rocks picked up at beaches from France to New England, for Gertrude Stein: 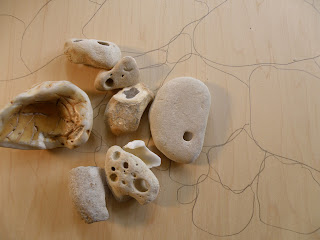 Posted by Ann Knickerbocker at 5:24 PM